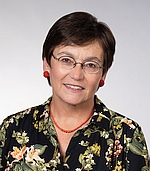 Born in Erlangen in 1960 and growing up in Franconia, I initially remained quite locally bound in the choice of my place of study. Thanks to the good connections of the FAU’s Department of English and American Studies to partner universities in the EU, however, I also had the opportunity to spend an extended period as a guest student abroad. I was enrolled at the N.U.U. in Coleraine, Northern Ireland for 15 months in total, doing research for my final paper about the Peace People and their role in the Northern Ireland Conflict. This extended stay abroad among English native speakers also proved very useful for my later professional choice to become a translator. After several job-related way stations at Memmingen, Weißenburg, and Kulmbach, I returned to Erlangen, where I now live and work as a freelance translator — and still love it.

One reason why German is a good language is that in this language, male and man are not synonymous. Translate this sentence.

I studied English, History and Political Sciences for Secondary Education at Friedrich-Alexander-Universität Erlangen-Nürnberg, spent 2 terms abroad as an exchange student at the University of Ulster, Coleraine; graduated in 1989; prepared for the Bavarian state examination for translators at the Institute for Foreign Languages and Area Studies at Erlangen-Nuremberg University, which I passed in 1992; and passed the 2nd state examination for teaching at secondary schools in 1996; on 25 September 2000 publicly appointed and generally sworn-in by the President of Nuernberg-Fuerth Regional Court as translator for the English language.

In my first job I was employed at the archive of Nürnberger Nachrichten, a widely read regional daily paper. During and after the prep time for the translator’s exam I worked part-time in the Regulatory Affairs Department of an Erlangen-based healthcare company. From 1994 to 1996, I spent my teacher training at Nuremberg and Memmingen, and immediately afterwards, I worked as a teacher at a secondary school in Weißenburg and a Waldorf school near Kulmbach for 2½ years. In 1999, I turned to translating again and was employed as a technical translator in two Erlangen-based translation agencies until 2004, when I went freelance.

My hobbies and interests